Pittsburgh, PA has been my hometown for the past 20+ years.  I cherish the time I’ve had in the Steel City but I’ll always be a Vermonter at heart.  I was born and raised in a small town called Swanton.  Swanton is 45 miles south of Montreal, Quebec and 35 miles north of Burlington, VT.  I grew up listening to some of the best players out there, from Phish to Nobby Reed.

My grandfather was an opera singer, my grandmother a concert pianist and my Dad exposed me to the best rock and roll music from the late 60’s to late 70’s.

>Produced 3 records with my band Steelesque

> Currently mixing a full band production EP with Steelesque. A collection of bluesy groove numbers recorded with the current members of Steelesque

> Mixed and Mastered music for the short film, “Coal Keeps The Lights On”, by Galaxy 454.

>Produced and Wrote Music for The Mental Caddie.

Steelesque started as an idea to bring all artists in the Pittsburgh, PA area together to share ideas. The idea was conceived at some point. An eventual musical experience reared its head and still continues to peek into various genres of sound.

Steelesque started out as two piece recording project with me calling upon Josh Egan to join the fold. Together we wrote, recorded and produced “Johnny On The Spot”.  Egan brought his ferocious drumming style to the party and added some tasty backing vocals. The EP received solid reviews and air-play on Pittsburgh’s biggest radio stations.

I was growing restless and wanted to get Steelesque on stage and test drive some old material he had lying around. After a couple months of jam sessions and auditions a solid group of players emerged.  By the end of January, a full set of raunchy blues fueled tracks were ready to take to the stage. The plan was to secure recurring relationships with Pittsburgh-based concert promoters and club owners and nail down some supporting slots for national touring bands. So far, so good. 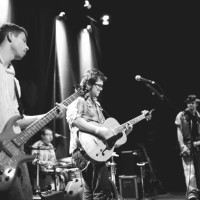